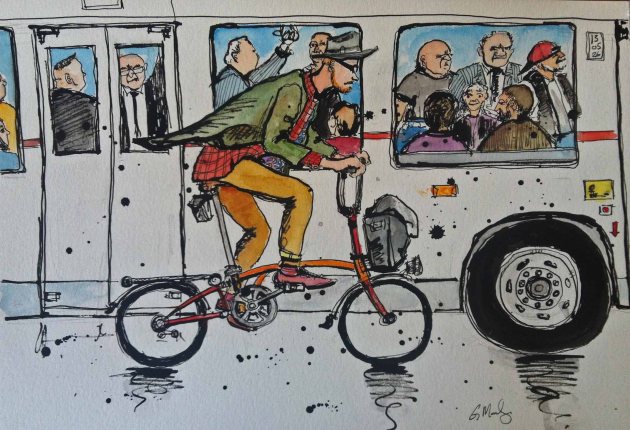 It was exactly one year ago that I made a life changing decision.

We were sipping a glass of wine on an outdoor patio at the “Instituto Valenciano de Arte Moderno” (Valencia Modern Art Museum). It was a glorious day. The sun was out, the flowers in full bloom and we had just spent a few hours going through one of the best galleries I have been to in years. Our timing could not have been better. The entire museum was dedicated to Architecture and design exhibits. There was a retrospective of the Madrid based Architectural Firm A-Cero which blew me away (Check out their website to see some seriously cool design). There was a floor dedicated to mega city planning and man-made environmental design for space stations and under sea submersible laboratories. There was also a gallery exhibition of original Russian Constructivist art and and design. It was the most incredible collection of El Lisitzky, Malevich, Tatlin and other major Constructivists that I had ever seen. I couldn’t believe my luck to see such important works.

So back to the life changing decision. While sipping our wine, I couldn’t help to notice this older gentleman in a suit, sitting at the next table. Under the table was a folded bike that was no bigger than 600mm x 600mm (24”x24”). It sat under the table next to him like a brief case. He settled his bill, said his goodbyes, picked up the bike which he carried off the terrace and with a quick flip-snap the bike was unfolded and he was off, down the street, blazer flying in the wind. I was gobsmacked! That was one unbelievable cool peace of engineering. I knew right then and there that I had to have one of these bikes.

Later in the day I found a bike shop in the old quarter of Valencia and they just so happened to carry these bikes – the bike was called a Brompton. I had never seen nor heard of a Brompton Bike up until that point. I immediately pulled out my iPhone and went online to find out about this company called Brompton. You definitely have to check out the Brompton Website. This company has such a kick-ass product and they have created a total cult following. The Brompton is the true Hipster urban commuting bike. These guys are marketing geniuses. They have created a brand that has a rabid cult following all over the world. Brompton owners post videos of their exploits with their bikes. They have Brompton Bike clubs in cities worldwide and there are even Brompton races every year held in places like Barcelona, Osaka, Seoul Korea and Rio De Janeiro.

As a designer, I knew I was going to own one. And the best news yet, there was a distributer (Tall Tree Bikes) in Ottawa, less than a kilometer from my home. I immediately placed my order.

When I returned home to Ottawa, I was in a major transition. I had shifted Architectural firms just before heading to Spain and had just closed my art studio. Three of our five kids had moved out and it was time to downsize. Janice and I bought a condo, which meant purging our lives of all unnecessary stuff – I could write a book on that event!

This was when I decided to ditch the car.

It was a huge decision to get rid of the car. I have been driving for 33 years, and had grown accustomed to having the convenience of a vehicle. I hated it though. I am very conscious of the environment and what we are doing to the planet, but I would not consider myself a hard core activist. Consideration for the environment did play a part in my decision, but the major factors for ditching my car were economics and health.

When you add up the cost of gas, parking, maintenance and insurance, the car felt like an anchor – and I didn’t even have loan payments! Public Transit is completely out of the question for me. Ottawa has, if not the most expensive, then very close to it, transit fares in Canada, and it is going up yet again this coming July. There was a point when we had five kids in school, and the cost of transit passes hit $450/month. That in addition to the $18/day for parking my car drove me nuts.

I come from a family of athletes and fitness and health have always been a big part of my life. I found that driving increased my stress levels and I found it more and more difficult to get consistency with my fitness program. I haven’t played hockey in a few years now,and driving to a yoga class just seemed kind of, wrong. Even before I ditched the car, I found myself more often than not commuting to work by bike or on foot.

I have been car free now for ten months, and I have to say I do not miss driving one single bit. It never even crosses my mind any more. My default is biking or walking. When the weather is nice, I pull out the Brompton. When it is not so nice, I walk. I no longer stress about traffic, or have to deal with crotchety people on the bus. I take my Brompton everywhere, to the office, the job sites, grocery shopping and even to the pub. I am healthier, way more fit, and my blood pressure is the lowest it has been in 15 years – not bad for a life long stress cadet!

So, if you are trying to de-clutter your life, or simply want to get in shape, I highly recommend you ditch that car and get yourself a Brompton! Yes, you will definitely look like a nerd, but the planet will love you and you’ll feel like a 10 year old kid again! It’s that fun and I wouldn’t have it any other way!